Lighting- It’s fairly shadow filled but thick sun beams shoot down through the green forestry swaying in the light wind above.

Props- Beside the house there’s is neatly stacked pyrimid of logs with a axe in a chopping block and a dusty old lamp hanging from a hook with a pane of glass cracked on the lamp.

Costumes- The traveller wears a old ragged robe with a pointed hood over top dusty grey pants ripped and dirty and a white shirt stained with dirt and hints of blood. Medium height agged leather boots strapped to his feet. And a leather aged sack on his back. Little trinkets and a knife hang from his waist and belts as well as shoulder strap. All his clothing is ripped and old.

Actors- The Traveller is a tall man 6,2 with long brown hair a thick dirty brown beard and brown eyes. He is very muscular, and about 25 years old.  Scars cover his dirty face.

Sound effects- There is birds chirping a river flows and a small howl wind so through the tree branches tapping each other, a quite rustic acoustic song plays in the back. 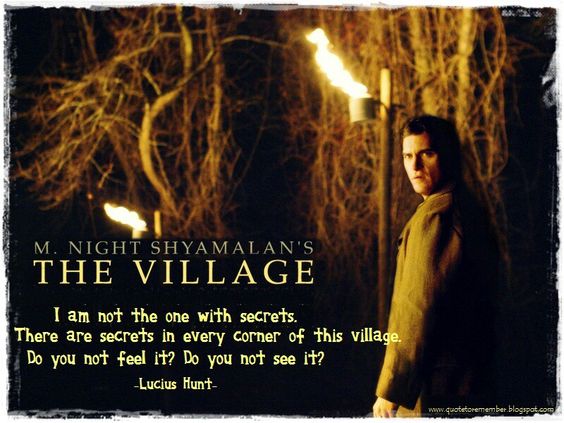 The techniques and styles of this film are very captivating. The camera always moves in a way that it’s not showing you everything that you need to know, It makes you fill in the blanks with your imagination. Like the scene where Lucius Hunt is in the forest and something runs by him, we do not see what it is we can only spot it for a second. The style is done in such a way that we do not know a lot at the start but they hint the holes in the plot to us, yet it is still hard to piece together.

I feel this type of “creepy” film does not fit in with the typical horror genre, because this film has a message and more of a meaning. The message is about today’s society and people, they create a alternative secret society to get away from the bad of today. The society is generally peaceful but in order to keep people from leaving they create a group of fictional monsters in the woods. Is it really better to live in fear then to live in a world where bad things sometimes happen? I believe it is a very different type of film and it I say set up very differently, there is no classic murderer or demon, it has many secrets and mysteries but is very different.

I think the director didn’t go for blood and and guts in his film, because he was trying to do something new and different. Every horror film is the same yet this one is very different. He goes for the uncertain feeling because it leaves the veiwers to figure it out on their own and to think about it a lot, possibly even to re-watch some of the film to grasp what’s going on. The viewer must figure out a lot for themselves and even imagine some, it is a unsettling film because of that uncertainess.

Overall I really enjoyed this film, I thought it was interesting and it really made me think a lot. I think some people dor. Like this film because it doesn’t tell you what’s happening all of the time but for those reasons I do like it. I would rate it six out of ten, it is not the best film and in my opinion it has a few holes in the plot, like how does sattalite imaging not find the villiage. But it is a fun film all in all.